It’s a science fiction double feature in the Galaxy when Rick Wilber and Gerald Brandt look at possible future incarnations of social media and corporate power. Rick, a prolific writer of short fiction, and editor of anthologies on media and baseball, published sections of his debut novel, Alien Morning, in Asimov's Science Fiction. In the future, Peter Holman provides freelance documentation of the arrival of aliens, the S'hudonni, via immersive social media interface Sweepcasting. Humans’ willingness to believe everything they see on media is the key to this thriller, which also explores fraternal conflicts.

The Courier, the first novel in the San Angeles series, introduced a far future California that has been turned into a multilevel city where corporations rule. Motorcycle courier Kris Ballard witnessed a murder and sought refuge with an underground resistance group. The Operative picks up right where The Courier left off, with the resistance group under attack, and Kris’s savior and romantic interest taken captive. Gerald is working on the next installment, The Rebel.
Mysterious Galaxy
5943 Balboa Ave, Suite 100
San Diego CA 92111
+1 (858) 368-4747
Directions 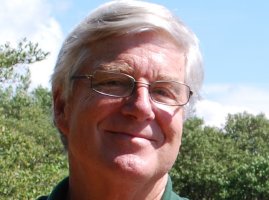